I lie down on the braided rug. You can always practise, said Aunt Lydia. Several sessions a day, fitted into your daily routine. Arms at the side, knees bent, lift the pelvis, roll the backbone down. Tuck. Again. Breath in to the count of five, hold, expel. 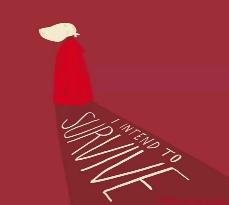 The Handmaid’s Tale follows Offred in the Republic of Gilead, where she is kept as a tool for reproductive purposes. Her current situation has psychologically affected her, and so she uses distractions as a coping mechanism. She shows evidence that she is succumbing to her new life, however, she also indicates resistance and awareness of reality.

Atwood chose to have Offred repeat what Aunt Lydia said but excluded speech marks that would separate the two characters. The absence of speech marks shows that Offred has succumbed to the ways of the regime. However, Offred mentions that Aunt Lydia taught her this exercise, and mentions ‘said Aunt Lydia’, which shows that she is still very much aware of her former self. This shows that she is refusing to submit to the government and has not entirely lost herself.

Offered explains the exercise in a very detailed manner. This shows that she has often been practising to improve her performance, to distract herself from the reality that this is her life forever. She is rehearsing so that she will perform well enough to be rewarded. Whatever this reward may be, it will be a change from her ‘braided rug’ and minimalistic life. The prospect of a change in her circumstance is what keeps her going and able to psychologically survive.