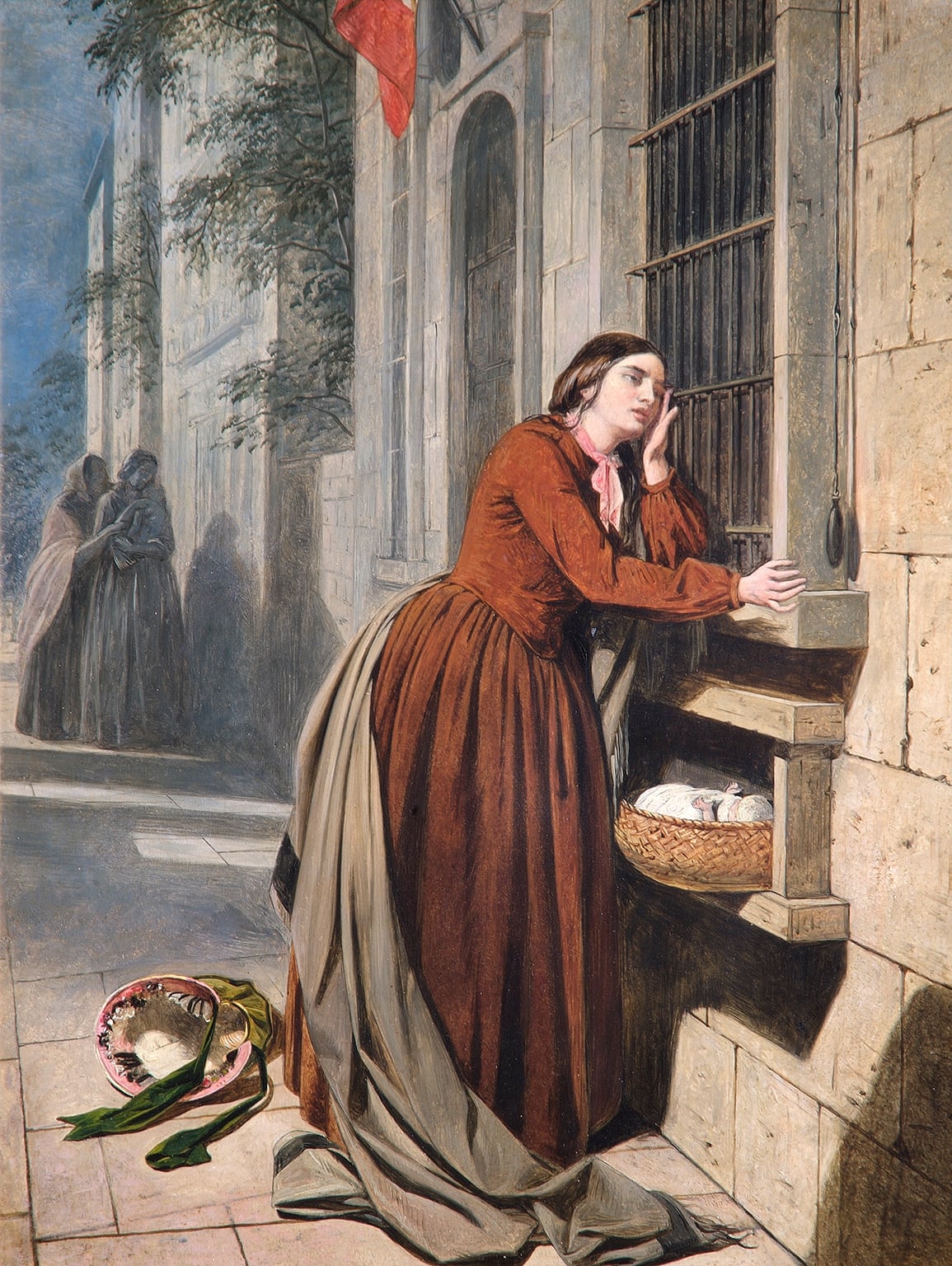 The following painting is painted by artist Henry Nelson O’Neil in St Petersburg Russia in 1855. The painting is a depiction of a mother in Paris depositing her child at the Foundling Hospital. The hospital in Paris was established in 1670 during the reign of Louis XIV. Unlike the London Hospital, the Paris Hospital followed a different admission system whereby mothers could easily deposit their child in a public place and were not required to go through a formal process.

The Foundling Hospital in London was opened by a philanthropic sea captain, Thomas Coram in 1739. However, the hospital was not an orphanage and the mothers were required to go through a vetting process before being able to deposit their children.

Coram was horrified by the condition of abandoned children and in an attempt to help, he campaigned to King George II for seven years before being granted a Royal Charter in 1739. Unmarried women with children had very few options before the erection of the hospital. They could either place their children in a poorhouse or leave them in the river, with the hope of someone else finding their child and giving her a better life. The mission of the hospital was to provide care for all the children who required it without any preference. But by the beginning of the nineteenth century, the demand for a place at the hospital was overwhelming and there were limited spaces. The hospital, therefore, started implementing an admissions procedure.

Women who wanted to deposit their children were subjected to a lengthy and intrusive admissions process which would judge their circumstances, character, and history. In her book – Victorian Women, Unwed Mothers and the London Foundling Hospital, Jessica A. Sheetz-Nguyen writes, that the decisions for admissions came down to ‘the mother’s reputation by moral measures, to see if she met community standards for an impeccable reputation, with the exception of this one fall from grace’ (2012: 2). Due to the limited number of places and the strongly emphasised sense of morality prevalent during the Victorian era, the vetting process was extremely thorough.

The mother was first required to obtain a petition form, in person, as ‘requesting a petition on behalf of the mother was strictly prohibited’ (Sheetz-Nguyen, 2012: 74), from the gate of the hospital. The porter handing out the form was required to evaluate the women, based on their clothing, mannerisms, and speech. Furthermore, within the form, the women had to fill out details about both herself and the father of the child – she had to mention the father’s last known whereabouts in order to prove that she really was abandoned and that there was no hope of his return (Sheetz-Nguyen, 2012: 68). If the petition was accepted, she would then have to present herself for the hearing of her case.

At the hearing, Sheetz-Nguyen writes, ‘the committee left no stone unturned in the investigation of the mother’s reputation’ (2012: 65). The mother was expected to answer extremely intrusive questions like, ‘Where had she met the father? Was he married? Did she know? Had he used force? Was she drugged? Had he given her money? When did he abandon her? Had he really abandoned her? Why didn’t she resist? Had she told him of her pregnancy? Had she told anybody? Would she be able to find steady employment once relieved of the child?’ (Sheetz-Nguyen, 2012: 65). The purpose of this was to confirm that, if the mother was set free of the responsibilities of the child, she would proceed to lead a virtuous life.

While the intrusive nature of the questions and the repeated stress on proving one’s virtue seems harsh for the modern reader, during that time, it provided unwed mothers an opportunity to regain their standing in society. The hospital, despite its prying questions, provided the mother a means to lead a life with integrity, whilst knowing that her child would be taken care of. She could be certain that the child would regularly receive food, care, and clothing. Both the mother’s and the children patiently waited for the day when they could reunite however, for many this wait was in vain.