Beloved sweetheart bastard. Not a day since then I haven’t wished him dead. Prayed for it so hard I’ve dark green pebbles for eyes, ropes on the back of my hands I could strangle with.

Spinster. I stink and remember. Whole days in bed cawing Nooooo at the wall; the dress yellowing, trembling if I open the wardrobe; the slewed mirror, full-length, her, myself, who did this

to me? Puce curses that are sounds not words. Some nights better, the lost body over me, my fluent tongue in its mouth in its ear then down till I suddenly bite awake. Love’s

hate behind a white veil; a red balloon bursting in my face. Bang. I stabbed at a wedding cake. Give me a male corpse for a long slow honeymoon. Don’t think it’s only the heart that b-b-b-breaks. 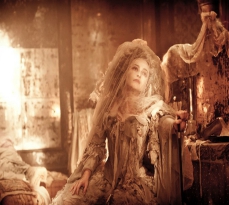 The poem begins with a juxtaposition of ‘Beloved sweetheart bastard’. The use of these adjectives shows that she is unable to decide on her feelings towards her ex-fiancé and still has not established a clear opinion of him. This also shows that she is concealing her past feelings for him, using this as a coping mechanism. However, her feelings begin to become very clear when she says that ‘not a day since then [she hasn’t] wished him dead.’

She has prayed so hard that he has ‘dark green pebbles for eyes, [and] ropes on the back of [her] hands [she] could strangle with’. The colour green connotes jealousy, which is clearly what Miss Havisham is feeling towards her ex-fiancé, who can continue with his life as normal, unlike herself. She is also envious of the reason why she was jilted at the altar; however; she is clearly seen to be trying to survive this jealousy. The use of the word ‘pebble’ to describe her eyes shows that she has lost herself and cannot compare herself with human attributes anymore.

Her sense of survival is further shown when she describes the ‘ropes on the back of [her] hand that [she] could strangle with’. This is a clear connotation of suicide as she is implying that she could end her life with these ropes. The fact that she feels suicidal shows that this is a very dark time for Miss Havisham, and so she is looking for any mechanisms for coping. However, it can also be a ‘rope’ to strangle her ex-fiancé, implying that she is at such a low point that she is willing to take such measures to relieve herself of this pain.

Duffy then opens a verse using the word ‘Spinster,’ a woman who is older and unmarried. The use of the one-word sentence shows the isolation of it from the rest of the poem. This reflects Miss Havisham’s own isolation from the rest of the world. The fact that she recognises this and addresses it shows that she is aware of her current state, and is using this isolation as a means of surviving her heartbreak.

Miss Havisham also talks of her ‘yellowing’ dress, which connotes decaying and expiration. She has chosen to remain in her wedding dress from the day that she was jilted. She explains that she ‘stinks’ and ‘remembers’ her ordeal. The fact that she is giving off an odour shows that she has been in this state for a long time, which illustrates the instability in her mental health as she is refusing to change her clothes, cleanse herself and move on from her ordeal.

Furthermore, she asks ‘who did this to me?’ This shows that she is refusing to take responsibility for her own actions, of remaining in her wedding attire and decaying away in the venue. This indicates that her psychological survival includes blaming someone else for her depression, instead of evaluating her own faults towards her heartbreak.

Her means of survival are further shown in the poem when she explains that ‘some nights better, the lost body over me’. This shows that she is surviving some of her nights by imagining a body over her. The adjective ‘lost’ suggests that she is thinking of her ex-fiancé. The fact that imagining herself with her ex-fiancé allows her to survive ‘some nights’ shows that she is using this as a coping mechanism to escape the fact that her fiancé is not with her. However, this ends abruptly when she bites herself awake. The act of biting herself out of her fantasy represents the reality that she cannot always survive her depression.

Lastly, Duffy changes the tone in the very last line when Miss Havisham finally admits to heartbreak. This makes the readers feel sympathy for her and understand that everything before this line in the poem, was merely her act of surviving her heartbreak.