The Bloody Chamber by Angela Carter

His wedding gift, clasped round my throat. A choker of rubies, two inches wide, like an extraordinarily precious slit throat.

After the Terror, in the early days of the Directory, the aristos who’d escaped the guillotine had an ironic fad of tying a red ribbon round their necks at just the point where the blade would have sliced it through, a red ribbon like the memory of a wound. And his grandmother, taken with the notion, had her ribbon made up in rubies; such a gesture of luxurious defiance! That night at the opera comes back to me even now … the white dress; the frail child within it; and the flashing crimson jewels round her throat, bright as arterial blood.

I saw him watching me in the gilded mirrors with the assessing eye of a connoisseur inspecting horseflesh, or even of a housewife in the market, inspecting cuts on the slab. I’d never seen, or else had never acknowledged, that regard of his before, the sheer carnal avarice of it; and it was strangely magnified by the monocle lodged in his left eye. When I saw him look at me with lust, I dropped my eyes but, in glancing away from him, I caught sight of myself in the mirror. And I saw myself, suddenly, as he saw me, my pale face, the way the muscles in my neck stuck out like thin wire. I saw how much that cruel necklace became me. And, for the first time in my innocent and confined life, I sensed in myself a potentiality for corruption that took my breath away.

The next day, we were married.

The train slowed, shuddered to a halt. Lights; clank of metal; a voice declaring the name of an unknown, never-to-be visited station; silence of the night; the rhythm of his breathing, that I should sleep with, now, for the rest of my life. And I could not sleep. I stealthily sat up, raised the blind a little and huddled against the cold window that misted over with the warmth of my breathing, gazing out at the dark platform towards those rectangles of domestic lamplight that promised warmth, company, a supper of sausages hissing in a pan on the stove for the station master, his children tucked up in bed asleep in the brick house with the painted shutters … all the paraphernalia of the everyday world from which I, with my stunning marriage, had exiled myself.

Into marriage, into exile; I sensed it, I knew it–that, henceforth, I would always be lonely. Yet that was part of the already familiar weight of the fire opal that glimmered like a gypsy’s magic ball, so that I could not take my eyes off it when I played the piano. This ring, the bloody bandage of rubies, the wardrobe of clothes from Poiret and Worth, his scent of Russian leather–all had conspired to seduce me so utterly that I could not say I felt one single twinge of regret for the world of tartines and maman that now receded from me as if drawn away on a string, like a child’s toy, as the train began to throb again as if in delighted anticipation of the distance it would take me.

The first grey streamers of the dawn now flew in the sky and an eldritch half-light seeped into the railway carriage. I heard no change in his breathing but my heightened, excited senses told me he was awake and gazing at me. A huge man, an enormous man, and his eyes, dark and motionless as those eyes the ancient Egyptians painted upon their sarcophagi, fixed upon me. I felt a certain tension in the pit of my stomach, to be so watched, in such silence. A match struck. He was igniting a Romeo y Julieta fat as a baby’s arm. 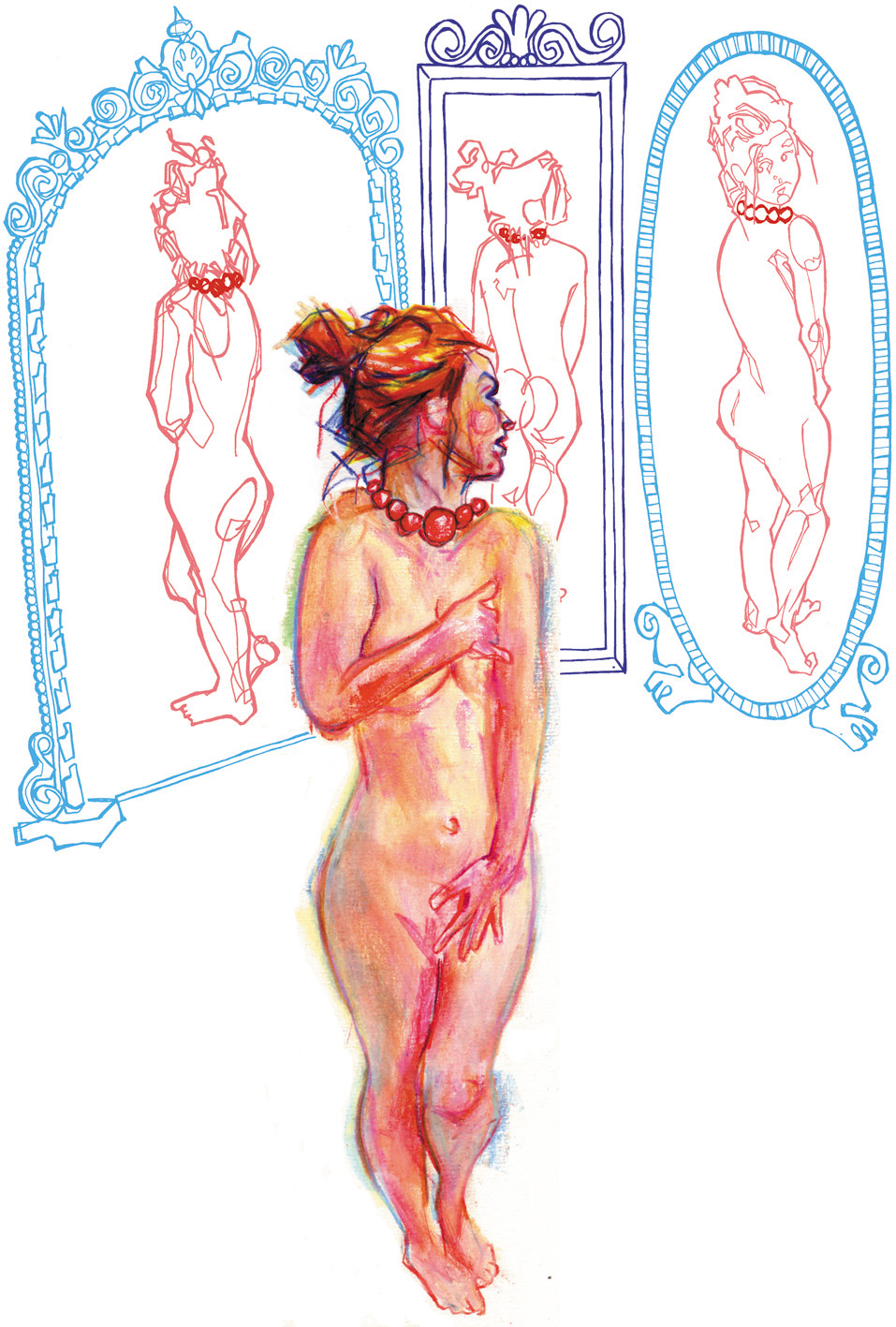 Death, exile, temptation and the imposing gaze of the husband are all prevalent themes in this passage, which are all extensions of imprisonment. The ruby choker symbolises the restraint imposed upon the heroine as a result of this marital relationship and becomes a key symbol of oppression throughout the extract. Language such as ‘clasp’ and ‘choker’ present a semantic field of captivity and death, whilst also animalising the female through the allusion to a dog collar. This in turn presents the heroine as a possession to the Marquis, who remains in a position of control throughout. The heroine perceives herself as compared to horse-flesh which highlights her feelings of objectification and dehumanisation; through this allusion she is again able to be possessed and threatened with consumption. Alongside forebodings of death, her marriage also leads to exile and distancing from society. Yet, the act of wearing the choker highlights a level of complicity with the perpetrator. The subject of self-imprisonment and awareness is thus introduced as the female is aware of the seclusion proposed by the marriage, yet accepts this consequence due to material gain. Social and marital imprisonment is thus accentuated as the heroine is possessed, seduced and consequently threatened into becoming a submissive wife. The heroine submits to the voyeuristic gaze of the husband and transforms into a corrupted, matured woman bearing the emblematic necklace laced in metaphorical blood.