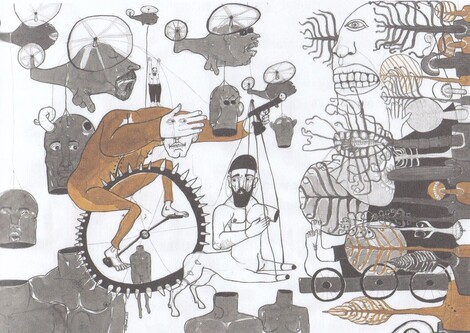 At noon, the wing is silent.
The curtain is a banner; time has obliterated the letters.
behind it, two eyes are scanning
an alley, empty
as a long trench for castrating the dead.

Helicopters are flying away.
Parachutists are ejected like the sperm of rapists.
The present is an eye with amputated lids.
The glance is bleeding.

The sun in the south is a merciless we,
an eye of a fevered Cyclops.
Two hands on the balcony feel its heated rails
like someone in a circus clutching the bars of a cage,
one half of which has disappeared.

The shadows that striate your blue nightgown
Will not vanish when you hide again.
Shadows imprison you.

Golan Haji’s ‘Eyes’ was part of an exhibition titled ‘Syria’s Art’ in Copenhagen in 2013. Each of Haji’s poems were also complemented by illustrations from Mohamad Omran. The joint venture of text and illustration allows for a multi-sensory experience of the brutal realities of the Syrian civil war. This ongoing war killed 224,948 civilians between March 2011 and March 2020. There are several belligerents involved and this creates a turbulent environment where it is difficult to discern who to trust or be aware of who is watching and when. This generates a Panopticon structure: an environment where there is a constant and sustained threat of surveillance from everywhere. This is reproduced in ‘Eyes’ in the form of a speaker who seems to feel they are constantly being watched. The title of the poem and the poem itself are fixated on the idea of eyes and seeing. The Panopticon threat of various parties watching, creates a feeling of suffocation and ‘shadows imprison[ing]’ individuals. Militaristic activities intrude intimately into the lives of civilians and they do not know if even their ‘shadows’ are surveilling them. The visceral and gruesome language also creates a lasting effect on the reader who is left with many graphic images to dwell over. The speaker has insured that their inescapable reality is palpable to the reader, through the complex shocking factors of language and imagery throughout.

The poem describes the environment around the speaker, who is surrounded by violence and constantly perceived surveillance. The proliferation of metaphors highlights the horrific events the speaker has experienced, which cause such distress that they cannot be explained precisely. This may also explain the allusions to mythology, like the Centaur, in the illustration. The illustration has many different elements overlapping each other, making the spectator disoriented as they try to keep up with the convoluted assortment of images. This displays how each individual in Syrian society must remain in constant hyper-awareness of their surroundings, constantly looking everywhere, like in the illustration, due to the increase of mass civilian surveillance.

Hyper-awareness is also evident in the second stanza, where the speaker refers to the present as ‘an eye with amputated eyelids’. This amputation can be seen to be a metaphor that represents the brutality and relentlessness of the surveillance situation and this metaphor functions in two ways. It could be that the belligerents have ‘amputated eyelids’ that perpetually surveil individuals or the eyes of civilians could also be ‘amputated’ to remain alert and ensure they are not caught doing something that is seen to be illicit. The audience could recoil at the imagery used throughout the poem, highlighting how traumatising the Panopticon environment becomes. Although the original Panopticon theory suggests a structure with a central point of surveillance, this representation shows the possibility of being watched from various points at once. The idea of multiple points of surveillance is seen in the illustration and has the effect of keeping your eyes constantly open, looking at all the bizarre and unusual things happening in the illustration. There are eyes everywhere, even on the helicopters. Giving the helicopters human form also shows that even inanimate objects offer no respite. Even the hand, that is covering the eyes, has eyes on it, highlighting that failing to watch is impossible in an environment under constant surveillance.

The unusual imagery is continued in the poem with the speaker’s reference to a ‘Cyclops’: a mythical one-eyed beast, which is the way in which the sun is described. The sun covers the whole of Syria and it could be seen to watch over it like the single eye of the ‘Cyclops’. The sun, therefore, becomes an object of suspicion in an environment where very little can be trusted. The idea of the sun actually watching could seem mythical in itself and this is perhaps why the sun is compared to the mythical ‘Cyclops’. This mythical imagery along with the grotesque imagery throughout both the poem and the illustration presents how constantly watching and being watched, leads to a blurring of the boundaries between myth and reality. In an environment where an individual is occupied in protecting against surveillance, they do not have time to decipher the true reality of the situation they’re in.

With the Syrian civil conflict continuing, studying poems and artworks like these becomes crucial for understanding the everyday realities of civilians. These civilians are not only under physical threats from bombs and guns but also subject to the psychological warfare of a Panopticon environment with multiple centres of surveillance that completely distorts their realities.